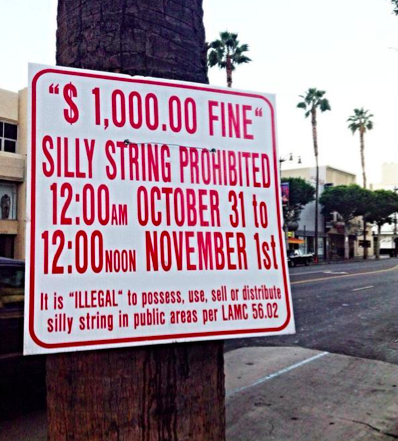 As some of us prepare to take our kids trick-or-treating this evening or throw on costumes ourselves, others seek to avoid the crowds of “over-aged” trick-or-treaters that attend the West Village Parade and otherwise fill the streets of New York City or simply look forward to enjoying an obligatory candy bar, we are here to help you enjoy a few legal treats, too:

Tired of dealing with the (apparently large) quantity of trash left of Hollywood, California streets by Halloween celebrators discarding used cans of Silly String, the Los Angeles City Council passed an ordinance in 2004 making it unlawful to possess, use, sell or distribute Silly String each year from 12:00 am on October 31st through 12:00 pm on November 1st.   Neither a trick nor a treat, violators may be found guilty of a misdemeanor ad fine $1,000. See here for the LA City Council August 2004 resolution approving the Silly String Ordinance. Spooky!

Costumes in the Work Place

If you are a small, medium or large business, you pretty much have free reign to prohibit or permit employees from wearing costumes to work. Of course, your productivity concerns, human resources considerations (e.g. encouraging employees exercise discretion and not wear costumes that may be offensive) and optics (e.g. what may be appropriate for a restaurant’s staff may not be appropriate for a doctor’s office staff) should all be considered. And for government employers, even though the First Amendment needs to be considered, there’s a string of cases from the 1970s that made their way to the U.S. Supreme Court that resulted in public-sector employers’ rights to reasonable regulate expression in the form of clothing and body art (e.g. tattoos, earrings, length of hair; see Kelley v. Johnson 425 U.S. 238 (USSC 1976) where the U.S. Supreme Court held that a county regulation limiting length of police officers’ hair was permissible).

Even though public school students’ rights of expression (which costumes would fall under) are generally protected under the First Amendment, school leaders (e.g. the principal) have significant leeway with respect to creating and evenly applying rules that ensure the learning environment is not disrupted. Therefore, school leaders in public schools could prohibit students from wearing costumes to school. Since school leaders do want their students to have fun, many may choose to have a Halloween-focused event (e.g. my first grade son’s school does a Halloween parade where the kids briefly put on their costumes for the event). Note: private schools generally have even more leeway in restricting forms of student expression because they are for the most part not a state actor (they are more like a private employer).